Guns in the home could lead to further tragedy during the COVID-19 pandemic.

Social distancing. Quarantine. Shelter in place. Millions of Americans are living in a new reality, and it’s unclear when things will return to normal.

Here’s what we do know: the coronavirus pandemic won’t erase our nation’s gun violence crisis. In some ways, it could make it worse.

We break down the ways our ongoing gun violence crisis intersects with the COVID-19 pandemic and share tips to help you stay safe and protect your family.

While families are contending with tremendous disruptions to daily life and nearly unprecedented uncertainty, COVID-19 also presents a life-threatening risk for America’s young people: unsecured guns in the house.

4.6 million children and teens in the United States live in homes where loaded guns are kept unsecured. Two of the greatest threats posed by unsecured guns to children, teens, and young adults are unintentional shootings and suicide. We must ensure that firearms are properly secured to protect the millions of young Americans who are spending significantly greater periods of time in their homes. By practicing safe storage—keeping unattended firearms unloaded and locked, with ammunition stored separately—gun owners can significantly reduce the risks of unintentional shootings and firearm suicide and save lives.

The most secure way to store firearms, as recommended by the American Academy of Pediatrics:

The Importance of Safe Gun Storage During the COVID-19 Pandemic >

While staying at home is crucial to slowing the spread of the coronavirus, we need to be cognizant of the increased danger domestic abuse survivors may face in their homes. Here are some of the ways this pandemic could exacerbate domestic violence:

Failing to remove firearms from those perpetrating domestic violence puts everyone at risk. In fact, in more than half of mass shootings where four or more people were killed, the shooter killed an intimate partner. One analysis found that nearly a third of mass shooters had a history of domestic violence.

Shelter-in-place and social distancing policies have limited many Americans’ in-person contact with friends, family, and other support networks, led millions of people to lose their jobs, and dramatically shifted thoughts about well-being and safety. For some, particularly the one in five Americans with underlying mental health conditions, this period of isolation and uncertainty may increase suicide risk.

When guns—the most lethal commonly available means of suicide—are combined with these risks, tragedies can occur far too easily. In the coming weeks and months, we must take actionable steps to help protect vulnerable individuals from firearm suicides.

Suicide and Firearms during the COVID-19 Pandemic >

As Americans hunker down and stockpile essential household and grocery items, some are stockpiling something incredibly dangerous: guns.

This surge is driven by people wanting to protect themselves and their families, which is an understandable impulse. But it could put families in even more danger.

The gun lobby has long tried to scare individuals into buying more guns. The NRA benefits from stirring up fear: fear of the government, fear of break-ins, fear of immigrants. But buying into the gun lobby’s fear-based worldview will only weaken public health and safety during this unprecedented time. The reality is that more guns means more gun violence. Self-defensive gun use is rare. Having access to a gun doesn’t better protect people from being injured during a crime compared to other protective actions like calling law enforcement.

The gun lobby has also tried to scare authorities into giving them a special status during the pandemic. The NRA has argued that temporary store closings violate the Second Amendment. That’s wrong. Both closing gun stores and leaving them open carry risk. Governments should make the decision whether to close any business based on the interests of public health, not gun lobby scare tactics.

As public health officials around the world are instructing, the best way to stay safe is to stay home and be considerate of those around you. This means avoiding a panicked rush to the gun store too. 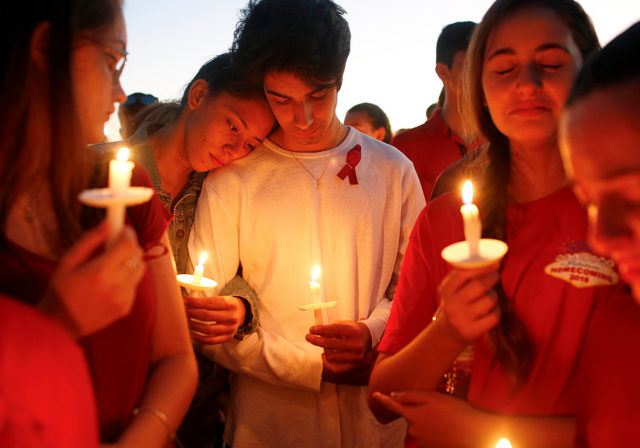 If you or a loved one are struggling, please reach out.