October 17, 2017—Today, former Congresswoman Gabrielle Giffords and Captain Mark Kelly announced that the movement they launched nearly five years ago will begin a bold new chapter, unveiling a new name for the organization, a comprehensive new website, and a renewed commitment to inspiring the courage of all Americans to fight gun violence. Americans for Responsible Solutions is now Giffords. The Law Center to Prevent Gun Violence, which joined forces with Americans for Responsible Solutions last year, is now Giffords Law Center to Prevent Gun Violence.

“Addressing a problem that almost took my life will be the cause of my life,” said Congresswoman Gabby Giffords upon the announcement of her namesake gun violence prevention organization. “I’ve seen great courage when my life was on the line. But I’ve also seen great courage as we’ve fought to save lives from gun violence. Every day I meet brave Americans who are standing with me in the fight for a safer future—from law enforcement officers and military veterans, to parents, community leaders, and concerned voters. When we stand together, stand up for our children, and use the full power of our voices and votes, I know that we can make change happen.”

“When people think of Gabby, they think of courage, determination, and grit—and it’s exactly those characteristics Americans need to channel in order for us to save lives from gun violence and make our communities safer,” said Captain Mark Kelly, co-founder of Giffords. “When Gabby and I began this journey, we knew this wouldn’t be an easy fight. The gun lobby has been selling a message of fear to the American public for years. It’s used its money to scare lawmakers into following its extreme ideology—and it’s made talking about guns culturally divisive, despite the fact that the majority of gun owners support stronger gun laws. A safer America requires changing that dynamic. We need more people to show the courage to stand up for what’s right and we need more elected officials to show the courage to take action.” 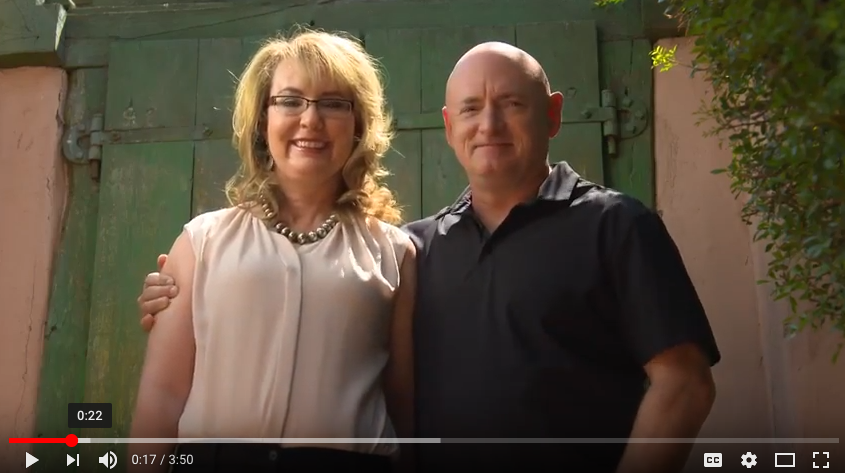 Gun violence in America touches every segment of our society, claiming over 30,000 lives annually. For every person who dies from a gunshot wound, two others are wounded. Gun violence at this scale is a problem that is uniquely American. In fact, Americans are 25 times more likely to be killed by a gun than people in other developed nations.

Yet, even in the wake of the worst mass shooting in American history, the Washington gun lobby is actively working to weaken gun safety laws. Right now, the gun lobby is demanding that Congress move a bill forward that would make firearm silencers easier to obtain—and inevitably much more accessible to dangerous people, like felons and domestic abusers. The gun lobby’s other top legislative priority is to federally mandate concealed carry reciprocity, which would allow more people to carry hidden, loaded guns in public with no oversight or standard for training. These are legislative proposals that prioritize gun industry profits over public safety.

“When Gabby and Mark originally launched this organization, they set their sights on big goals: to bring new people into the conversation about gun violence prevention and to challenge the gun lobby’s influence on Capitol Hill and in all 50 states,” said Peter Ambler, Executive Director of Giffords. “And over the past four years, they’ve done exactly that. Our organization played a role in passing over 200 new, stronger gun laws in 45 states and Washington DC. We can continue this momentum, but to do that, more Americans must share Gabby’s courage, share her commitment, and fight with Giffords for a safer America.”

Today’s announcement signifies more than a name change—it relaunches an organization that has been built to run even more effectively and represents a renewed commitment to saving lives from gun violence. Giffords is now poised not only to mobilize lawmakers and the constituents they represent in support of safer gun laws, but also to challenge the gun lobby’s extreme agenda in court and to research, write, and defend the laws, policies, and programs proven to reduce shootings. Last year, Americans for Responsible Solutions and the Law Center to Prevent Gun Violence formally partnered to expand their missions and increase their impact. The Law Center’s unmatched legal expertise, paired with ARS’s political acumen and tireless advocacy, made the organizations an even greater force to be reckoned with. Today, that force is now officially united under one name: Giffords.

“For 24 years, the Law Center’s attorneys have developed lifesaving gun safety legislation, successfully defended smart gun laws in the courts, and educated the public on the proven solutions to this devastating—and uniquely American—epidemic,” said Robyn Thomas, Executive Director of Giffords Law Center to Prevent Gun Violence. “Giffords Law Center now has a much larger platform to bring key policies like universal background checks to more states and to hold the gun lobby accountable for its attempts to profit at the expense of public safety. We are proud to stand alongside Gabby and Mark in this all-important fight to save lives and to inspire the courage of all Americans to demand safer gun laws.”

The organization’s political arm, Giffords PAC, will continue working to reduce gun violence by empowering voters with information and by supporting candidates who will stand up to the gun lobby and fight for safer gun laws. Giffords PAC issues endorsements in key races to inform voter decisions, educates candidates about gun violence prevention policy, and runs independent expenditure campaigns to shine a spotlight on elected officials who support dangerous gun laws. In 2016, our PAC’s flagship program was in the US Senate race in New Hampshire, where it invested $2.6 million in a targeted campaign to defeat incumbent Senator Kelly Ayotte by reminding voters of her vote against universal background checks, making the race a referendum on gun violence prevention.

Read more About the Impact of our Work: Fighting to Save Lives

My Father, My Friend.

My dad was murdered in Dayton. Nobody should have to know how that feels. When I was growing up, my …

May 29, 2020 — With unrest continuing in Minneapolis after the death of George Floyd and shots fired at protests …